Nexus, sometimes called the Riverwhore's Legs, is situated at the confluence where Yellow River and the Grey River become the might Yanaze. Built atop the ruins of the First Age city Hollow, Nexus is a teaming metropolis driven by trade and manufacture. The Council of Entities, a mystically enforced oligarchy, enforces laws that maximize the wealth of the few who sit atop the power structure. Near a million mortals work in desperate conditions to earn the wages to survive. The city is full of opportunity for those who can use their wit to rise above those who are crushed by the greed and power of the oligarchs who run the city.

Nexus is a city of hills and canals, a maddening tangle of streets and markets, crowded shanties and towering First Age spires. The city wall, which runs between the Yellow and Gray Rivers stands only 15 feet and has 11 gates, which act more as custom tolls than as a defensive barrier. All who enter the city must pay the head tax, or face banishment.

Nexus holds over a million inhabitants packed together in too little space. With the swampy environment, Nexus stinks of waste, fish, and ash. Ash and soot blacken the streets and river fog chokes the lower districts of the city, especially Nighthammer. The rivers are prone to flooding the lower districts which show water damage on most buildings. The shantytown slums of Nighthammer and Firewander and prone be being washed away. The streets are winding and too narrow for pack animals. In places, they climb over buildings and across narrow rope-and-wood bridges.

Nexus is a swampy city and the canals provide easier transport for goods than the narrow winding streets. The canals are crowded with boat traffic ranging from heavy barges to single passenger poll-boats. The currents are swift and dangerous to the unskilled. Nexus, Nighthammer, and Firewander are crisscrossed with canals.

Several Pully Car lines cross the city – dangling wooden cars that attach to cables. Tavel is slow, but all three lines stop near the Big Market and climb over the ridge of Cinnabar and Sentinel's Hill.

The countryside sourounding Nexus is not idealic. Second rate inns and tea houses compete with the walled estates of the wealthy. Roads kept clear by chain-gangs of slaves, funnel caravans toward the great city. Nearly all the other land is rolling hills terraced for farming.

Ten miles from the city along all roads, black columns mark the line of exile. Any exiled from Nexus must bast beyond this pillars before nightfall the next day.

Nexus is divided into multiple districts, each with their own character. Residents of Nexus judge others based on where they live. The lower districts, Nexus, Firewander, and Nighthammer are looked down upon by those who live in the upper districts of Bastion and Cinnabar. Sentinel's Hill sits somewhere in between, with the residences at the top of the hill being nearly comparable to Cinnabar and the sections along the wall sequestering Firewander are seen as barely better than the other side of the wall. 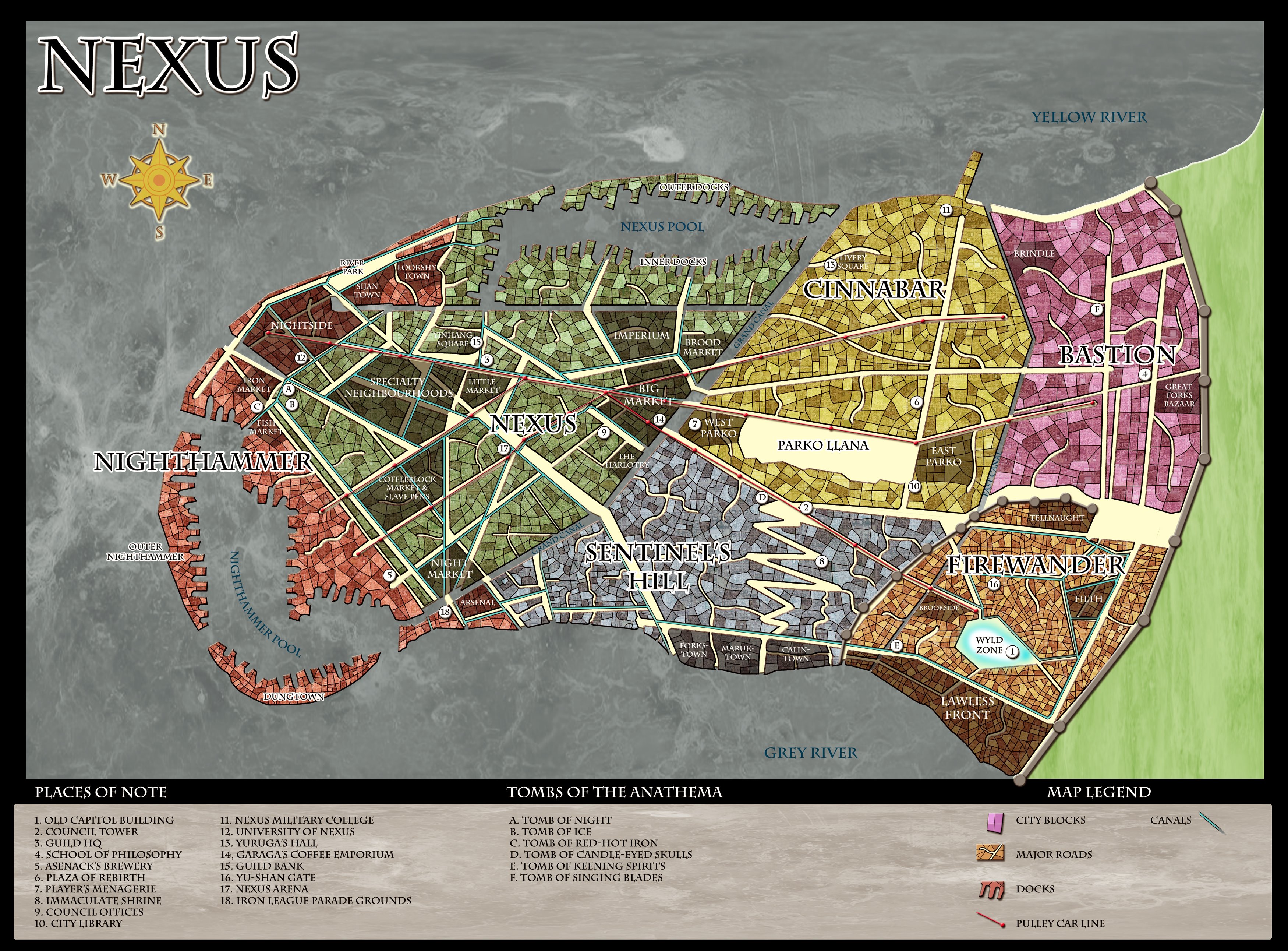 The heart of commerce

With its bustling markets, the Nexus district is the heart and the epitome of The Riverwhore's Legs. The district is crowded with multi-story building, including many First Age towers that reach 8-12 stories. Its divided into more than 20 island-blocks by numerous canals. The district is occupied by skilled craftsmen, minor merchant and officials, and visitors to the city.

Named for the unceasing hammering that comes from the  workshops of the districts, Nighthammer is the westernmost district of the city. The district is a center of ceramics, smelting, and metal work. Nighthammer's workshops produce iron, steel, cast bronze, copper goods, tinware, and porcelain for the Scavenger Lands and beyond. The cramped tenanment neighborhoods of Nighthammer house the laborers of Nexus, and other than the prestigious foreign neighborhoods on the banks of the Yellow River, these neighborhoods are looked down upon by most of the city.

The city on the hill

Cinnabar is the cultural center of of Nexus and home to the city's middle class. Numerous art galleries, ballrooms, theatres, small stadiums, and parks grace the district. The residents consider themselves above the masses. The southern hill of the district is dominated by the massive Parko Llana. The district is also home to most of the mercenary companies that operate out of Nexus, with their walled barracks complexes concentrated in the northern hill. Small neighborhoods of brothels, taverns, teahouses, armorers, and other business cluster around each compound.

Wealth has its privileges

Bestion is the most affluent district, filled with the estates of the wealthy. Clean well maintained streets, beautiful fountains and architecture, private but visible gardens grace the district. Bastion has long maintain old traditions dating back to before the city's founding, and the families of the district take pride in fashions a century or two out of date. The district is a closed community, and "undesirables" are stopped by patrols of Hooded Executioners and Bronze Pioneers. Bastion also hosts embassies from many of the polities of the Hundred Kingdoms.

Sentinel's Hill bears the name of hte hill it rests upon, which is the tallest and steepest of the hills of Nexus. The district houses a cross-section of Nexus residents, with members of the Council living near the top of the hill and some of the poorest of Nexus living by the river or in the shadow of the Sentinel's wall that hems in Firewander. Narrow steets and spartan tenaments, apartment buildings, and townhouses cling to hillside leading down to Firewander.

The center of old Hollow, Firewander is overcast with a storm of flame, smoke, and lightning. The firestorm rests above the old capital building and shrouds a Wyld zone, which disgourges monsters and warps the inhabitance of the district who stray too near too often. Only the poorest a most desperate live in Firewander, and the closer one gets to the center, the more empty the streets become.

Beneath the halls of wealth and power

No map ever shows Nexus least known distict. Beneath Sentinel's Hill and Cinnabar, a network of tunnels, caverns, and ruins forms Undercity. Few live in the informal district, and those who do prefer to remain anonymous.