Greyfalls is the isolated eastermost foothold of the Realm. The region was established as a Realm protectorate in one of the early treaties between the River Lands and the Realm, and successive Realm satraps have spent generations building it into a profitable center of trade and craft. Under the stuardship of House Nellens for the last century and a half, the satrapy has become one of the most profitable in the Realm. Now, with the disappearance of the Scarlet Empress, the instability of the Realm reaches even to the depths of the Threshold.

The satrapy and the city are an important transshipment hub for Realm trade. While direct trade between the Realm and the Confederation of Rivers is restricted, Greyfalls status as a protectorate allows free trade with both. The last few genearations of satraps have built up infrastructure and encourage manufacturing. Greyfalls has become know for fine paper, glass, and ceramics.

The city of Greyfalls is situated bellow the massive Grey Falls on the Lesser Rock River. While not as large as the great city-states of the Confederation of Rivers, the city has a sizable population of over 55,000. Massive winding city walls with with 65-foot towers protect and enclose 7 square miles of the city proper.

The over 700-foot waterfall fills the city with the constant roar and mist of the falls. With little available stone, most of the buildings are constructed from yellow brick and reach 3-4 stories tall. Shops and workshops dominate the ground floors and homes take up the remaining space. Roofs are tiled red, though the occasional blue tiled roofs add color to the city. Throughout the city, tree-shaded plazaz are overlooked by Immaculate shrines, local temples, and serene teahouses. Wealthy families compete to build ever taller towers and grander domes, granting the city a spectacular skyline against the backdrop of the falls.

[The falls, walls, domes, and blue tiles are missing from this image, but sets a find image of the city and the surrounding countryside. Imagine banners hanging from the towers denoting the controlling families.]

Mist-town
At the base of the waterfall, filled with the cold mist-spray from the waterfall. Working class with slick streets and the perpetual booming of the falls. Everything is covered with moss, lichen, and ivy.

Nooji Plaza
A seedy blue-lantern district and the main river-crossing point with dozens of small ferries. A single arch of the bridge that once crossed the river into the Hundred Kingdoms ramains on the banks of the river. Gambling dens, flophouses, and gin-joints.

Canal Gate
The main docks and warehouses down river of the city where the Nellens Canal, which bypasses the falls, meets the Lesser Rock River. Foreign accommodations for merchants, including finer restaurants, brothels, tea houses, shrines, and inns.

Khanzar's specializes in chocolate drinks and delicacies, and is the unofficial headquarters for Guild business, which is officially banned from operating within the city.

Alder Plaza
Located up the hill from the falls. The home of wealth merchants and the families of those from the Realm. Restricted access and fancy courtyard gardens.

Garrison Heights
The miliary quarter overlooks the city, and houses the Imperial Army Garrison and the Satrap's Palace.

The satrapy of Greyfalls is ruled directly by Realm officials and appointees with almost no self-rule. 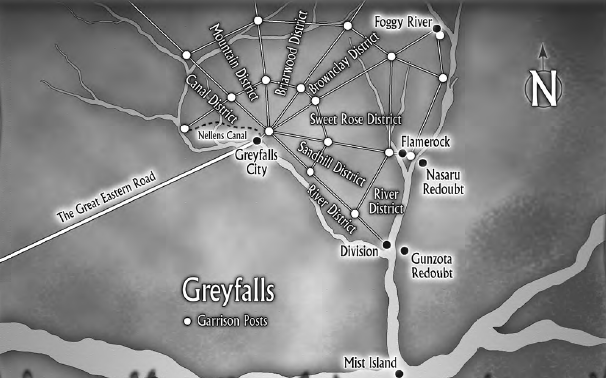 [This map is a fair representation, but the roads are too straight and the rivers are unlabeled.]

The Satrapy of Greyfalls holds dominion over the triangle of land between the Lesser Rock River and Greater Rock River with a total population over half a million. The rolling hills, shallow streams, eastern hardwood forests are dotted with small towns surrounded by farmland. The landscape is ideal for ranching and herding. In the last generation, the deep wells created by the House Nellens satraps have started supporting large scale agriculture of hemp, flax, and cotton.

Immaculate shrines with onion domed minarets dominate the western side of the central plaza in most towns. Most people are devoted to the Immaculate Order and content to lead simple but comfortable lives.

The norther edge of the satrapy is bounded by the foothills of the Mountains of Dawn.

The population of the Greyfalls satrapry is kept divided by its diversity. The Realm emphasizes the differences between the peoples to keep them from developing a shared identity.