Also called the City of Temples, House of Festivals, or simply Decadence, Great Forks is known for tolerance, art, culture, learning, revelry, drugs, and slavery. Located on the Yellow River, Great Forks is eclipsed only by Nexus as a trade hub in the East. But what the city is most known for are its supernatural residents, including gods, elementals, Raksha, and Exalted, and the rulership of the three gods who brought their people together to found the city. 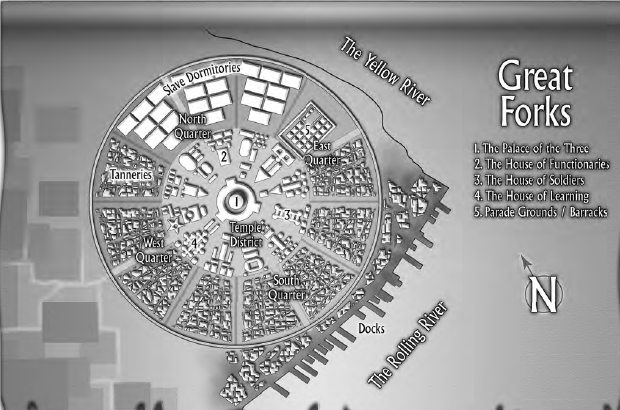 [The map give a good general layout but many of the building and streets depicted are out of scale. Other than the radial streets, they should bee more tangled, and the large buildings make the city look smaller than it really is.]

The city is located at the confluence of the Rolling River and the Yellow River. The city walls, granite sheathed in pale marble, were built early in the city's history and planned to accommodate growth. Parts of the city are still sparsely populated.

Bustling docks south of the city walls accommodate ships that are the lifeblood of Great Forks economy. Great Forks is the furthest inland port that can accommodate deepwater seagoing vessels. The main exports are drugs, dyes, and medicines. Most goods are shipped downriver to Nexus, Lookshy, and other trade centers by the Guild.

The center of the city is the Palace of the Three, the hub of worship and governance, ringed by the Temple district. Further from the hub are the middle-class neighborhoods and necessities for daily life. The poor live in tenements and hovels clustered against the city walls.

Beyond the walls are wide arcs of farmland that produce the drugs and herbs vital to the cities economy. Further sill are the vineyards, orchards, and field that feed the city.

The military of Thorns was strong but many military units suffered heavy casualties at the Battle of Mishaka during the war against Thorns. Many new units have little experience, no tradition, and untested leadership.

The gods of Great Forks came from elsewhere leading desperate refugee populations fleeing the contagion and the Balorian Crusade. The threat of the nearby shadowland made the land undesirable, and all three groups were granted permission to settle there. Rather the fight each other for that right, the three god united their people to forge one of the greatest cities of the age.

Spinner of Glorious Tales (Talespinner)
A once-mortal god of travelers and storytellers who gained a portion of divine power from three gods he tricked with magnificent stories. He appears as a middle aged man with sun-worn skin and a halo of light and energy but he can take the form of any traveler. He appreciates a good tale, audacious deeds, and the freedom of the road.

Weaver of Dreams of Victory (Dreamweaver)
A goddess of dreams with mysterious origins. Appears as an amalgam of women known to the viewer. Instills harmony and a feeling of community to the people of Greatforks. Interacts primarily through dreams.

Shield of a Different Day (Dayshield)
A martially powerful and beautiful war goddess. Once a goddess martial diplomacy, she abandoned her place in heaven when the peaceful wars she oversaw became scarce. In times of great need, she takes her place on the battlefield at the head of the army of Great Forks.

The Festival of the Three

A triennial festival that commemorates the coming together of the Three Gods and Three Peoples who founded the city. The festival lasts three days and nights, with three processions, each representing one of the gods and one of the peoples, winding through the streets toward the Palace of the Three at the center of the city. The processions are said to pass along every street in Great Forks by the end of the festival.

The mortal citizens are highly literate and delight in athletics, festivities, and herbal pleasures. They dress in luxurious clothing that displays their bodies. Descent from supernatural beings is a mark of prestige, and mortals marked by such ancestry dress to highlight such marks. Many mortals in Great Forks exhibit god-blood traits, some merely cosmetic while others are quite powerful. Most citizens genuinely love their city and feel privileged to live there (and not anywhere else).

The lifestyle of the citizenry is made possible only by the masses of non-citizen slaves that form the backbone of the city's economy. They have some rights, families are not split up and the price of manumission is set, but most are kept docile through invigorating euphoric drugs that leave the mind clouded. The Guild provides the slaves that work the vineyards and drug fields of qat, marijuana, and tobacco. Skilled slaves and pleasure slaves are typically born into enslavement or sold at a young age when families cannot care for their own.

Many spirits, elementals, and other supernatural beings live in Great Forks as citizens. Raksha are permitted in Great Forks and many are drawn to the city. With the return of the Exigence, mortal heroes flock to Great Forks seeking the exaltation. Exigent Exalted empowered elsewhere come to the city seeking their own kind and to learn more about their powers. The Three offer patronage to Exalts willing to protect the city.

Great Forks is ruled by the Three through the Council of Ministers, nine appointed officials that are a mix of mortals, exalted, god-blooded, and spirits. The ministers oversee a merit-based bureaucracy staffed by citizens of Nexus. (9 members, mixed mortal, exalt, god-blood, and spirit) and a merit based bureaucracy (p. 89)

The law is maintained by divinely blessed Enforcers, an order of spirits, god-bloods and enlightened mortals. Civil offenses, such as tax evasion, destruction of property (including killing slaves), and obstruction worship, are penalized with fines. Criminal offenses, such as assault in varying degrees and murder, are penalized with fines, maiming, or execution depending on the severity of the crime. Great Forks defines assault on another's will, or mind control through magic, as a criminal offense. Exalted who use their essence to influence those around them walk a fine line, though their actions are usually not considered criminal unless they run awry of the authorities.

It is illegal to compare Great Forks to Yu-Shan lest the gods of the Celestial Bureaucracy grow jealous of the City of Temples.

Great Forks is divided into four quarters array around the central Temple district. The main avanues radiate out from the center like spokes with the city wall encircling the city. The dockyards sprawl beyond the walls.

The Palace of the Three, an domed work of alabaster is the center of the city, worship, and government. The palace is the hub for the spoke-and-grid layout of the city. Other administrative buildings cluster around the palace.

Around the hub of goverance are temples to many gods and cults, including the Elemental Dragons, the Unconquered Sun, and Luna. There are over a dozen large temples, half a hundred medium house of worship, and over a hundred small shrines. The priests are in constant competition to attract worships through festivals and divine appearances. Some temples accept open worship, others are mystery cults, and some vary from by festival. Scattered around the area are small playhouses, fairgrounds, inns, teahouses, parks, arenas, gymnasiums, villas, markets, gardens, and sorcerous frivolities.

The north quarter it dominated by massive slave dormitories and laborers tenements. The main streets are kept clean, but the alleys can be dangerous for the unwary. The quarter is home to most of the cities thieves, thugs, burglars, foragers, fences, and informants.

Home to the military barracks and parade grounds, along with supporting playhouses, brothels, and drinking halls. The district is also known for healers, surgeons, and herbalists.

The trade district dominated by markets and warehouses for goods waiting to go to the docks. The docks abut the walls of South Quarter and many visitors to the city stay in this area, making it one of the busiest districts. Large stores of supplies to withstand siege are kept under guard in South Quarter.

Taking advange of the prevaling wind, West Quarter houst the tanneries, dye-works, and drug processing operations that produce an overwhelming and intoxicating mix of aromas. Prayer incense braziers dot the district directing worship to wind spirits who ensure the air of this quarter is always blown away from the city.