Genjo is a former crime boss with aspirations of being a refined gentleman from Thorns. When Thorns fell, he smuggled his family out and set up a refugee community in Nexus. He exalted as a zenith caste while defending his community and left Nexus to avoid drawing to much attention. He’s a big jovial man who fights with his fists.

Genjo’s life has followed a winding path. He grew up in Thorns, proud but poor. At a young age, he found is place in the street gangs that thrived in the underbelly of the city. He used his strength and intimidating demeanor to make a name for himself as a fighter.

During the Autocrat’s War, Genjo joined the army for the promise of pay, loot, and glory. He fought across the Scavenger Lands, surviving some of the major battles of the campaign. Despite Thorn’s losses, Genjo made a name for himself once again. He made friends too, and when the war ended, he returned to Thorns to the employ of one of the bosses of a major crime syndicates. He progressed quickly from enforcer to boss, commanding a crew of his own.

Genjo married up, paying a high bride-price to an impoverished noble family. He tried to hide his criminal dealings from his new wife, taking on the guise of a merchant-gentleman, but she saw through his rouse. Rather than treating Genjo with disdain, she offered to help, advising him with her keen intellect and keeping the books. Together, they prospered and started a family. Genjo continued to rise within the syndicate, and turned more towards legitimate business dealings. Things were going well.

Then Thorns fell. The fallen behemoth Juggernaut dragged itself to the walls of Thorns. Thousands of zombies and hungry ghosts poured over the city’s defenders. The dragonblooded stood to stem the tide, and were slaughtered in the field by the Mask of Winter’s deathknights. Refugees fled the city, Genjo and his family among them.

Genjo looked out for the people around him, leading them out of the rapidly spreading Shadowland and across the Scavenger Lands. He use the contacts and favors he had built through his criminal enterprises, and managed to lead a community of several dozen families from his neighborhood to safety. Eventually, they reached Nexus, and they used the last of their wealth to pay the head tax and enter the city.

Lead by Genjo, they began to build a new life for themselves in Nightside. The rent was outrageous for the moldering tenement they received, but it was enough to house them all, and while it didn’t pay well, work was plentiful. Other refugees from Thorns joined them in Nightside, beginnning to form and informal Thorns Town neighborhood.

Everything changes for Genjo once again when one of the frequent floods struck the neighborhood. Most of the families retreated to the relative safety of the second and third floor, but one child was caught by the rising water and swept into the canal. Without hesitation, Genjo went after him, and almost had him to safety when a riverdragon rose out of the canal. Genjo threw the child to the balcony, and turned to face the beast. The riverdragon pulled him into the river. Genjo exalted to the zenith cast, and killed the beast with his bare hands.

His exaltation was accompanied by a vision of the Unconquered Sun. The Sun spoke: “You shall be my priest, and then king. Your journeys shall be long. Guide your companions in the righteousness of my way. You You shall lead your people to salvation and caste back the dark pall over your homeland and restore it to the Sun.”

Fearing the repercussions that could befall his family and community, Genjo fled the city of Nexus. 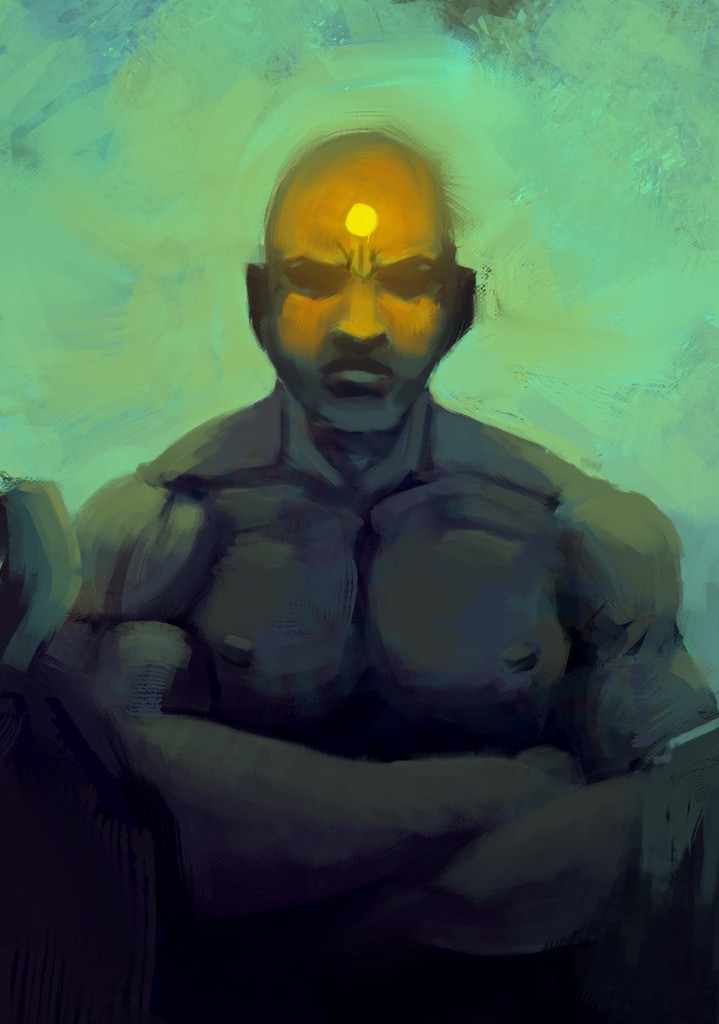